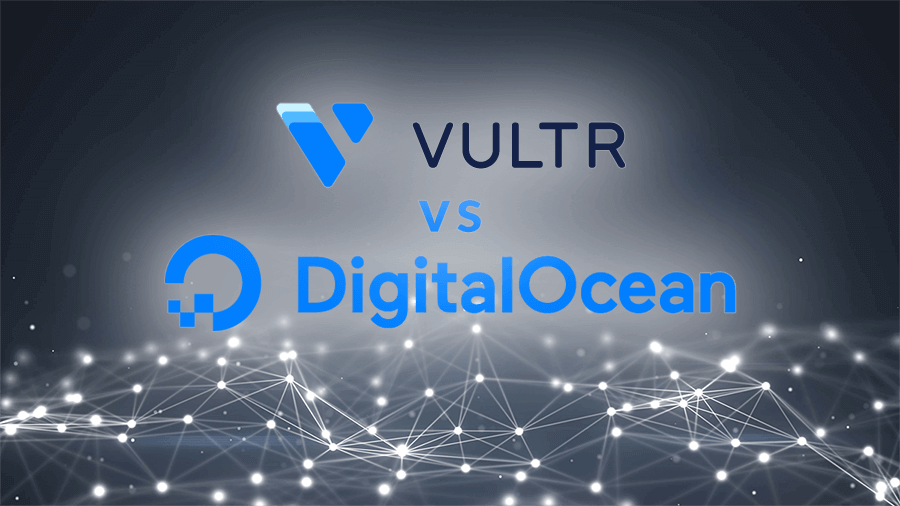 Virtual private server (VPS) hosting has become so affordable over the years, that it’s no longer just for high-traffic websites. VPS hosting is perfect for anyone who desires a much greater level of control over their server than shared hosting can provide. The goal of this Vultr vs DigitalOcean comparison is to help you choose the best cloud VPS hosting for your project, and that requires us to compare Vultr and DigitalOcean in terms of their features but also their performance and price.

But before we get started with our Vultr vs DigitalOcean comparison, let’s first take a closer look at the most important benefits of VPS hosting:

In summary, VPS hosting is perfect for those who want excellent performance and complete control over their web hosting experience without spending a small fortune on dedicated hosting and dealing with the plethora of performance and availability problems associated with shared hosting. It doesn’t really matter if your website have 500 or 500,000 monthly visitors because VPS hosting allows you to start small and effortlessly scale up as your audience grows.

As we compare Vultr vs DigitalOcean, know that both make an excellent choice for developers looking to deploy, scale, and secure their websites and web applications in the cloud. They’re very similar platforms, but have enough unique features to warrant a thorough review.

Launched in 2014, Vultr is the new kid on the block when it comes to VPS hosting providers. On its website, Vultr states that it’s “on a mission to empower developers and businesses by simplifying the deployment of infrastructure via its advanced cloud platform.” Since its launch, Vultr has successfully expanded to 16 regions around the globe, and it now has over 100,000 customers, who come from more than 150 countries.

At the time of writing this article, Vultr has spun up over 23 million cloud servers, whose smooth operation is the responsibility of over 50 developers and engineers. Since its launch, Vultr has launched one-click application support, introduced high-CPU plans, and rolled out many other exciting features that have helped establish it as one of the best VPS hosting providers.

Before there was Vultr, there was DigitalOcean. Since its launch in 2011, DigitalOcean has become one of the most widely recognized hosting providers in the world. In fact, it’s the third-largest hosting company in the world in terms of web-facing computers. DigitalOcean was founded Moisey Uretsky with the goal to provide server provisioning and cloud hosting for software developers. The list of DigitalOcean’s loyal customers includes such high-profile names as Docker, GitLab, Slack, HashiCorp, and Splunk.

DigitalOcean calls its virtual machines droplets, and they all use KVM as hypervisor. Customers can create droplets in various sizes, and they can choose from 12 different data centers that are strategically positioned around the globe.

If you’ve been using shared hosting services and have no experience with VPS hosting, you will be pleased to know that both Vultr and DigitalOcean make it exceptionally easy to deploy a server thanks to their control panels.

Vultr’s control panel is well laid out, and you should be able to figure out how to deploy a server without any help. All you need to do is select where in the world you would like the server to be deployed, choose your operating system, and then select how much resources you want. Available for instant deployment are CentOS, CoreOS, Debian, Fedora, FreeBSD, OpenBSD, Ubuntu, as well as Windows Server 2012 and 2016.

Vultr gives you the freedom to upload your own custom ISO, allowing you to install virtually any operating system you want. The ability to upload a custom ISO also comes in handy during server troubleshooting since you can take advantage of any of the countless excellent Linux-based system rescue distributions.

DigitalOcean doesn’t give its customers such a broad range of operating systems to choose from, and it also doesn’t support Windows. However, it boasts a very large number of pre-configured 1-click applications for easy deployment, including LAMP, Docker, GitLab, Jenkins, Plesk, cPanel, WordPress, and many others.

There isn’t much difference between Vultr’s and DigitalOcean’s control panels as they are both self-explanatory and easy to use.

Both Vultr and DigitalOcean care about their customers’ data and provide reliable backup functionality. With DigitalOcean, you get five automatic backup slots, which you can use for system-level backups at weekly intervals. Enabling backups for a droplet adds 20% to its cost, so a $5 droplet suddenly becomes a $6 droplet. Vultr also charges its customers at 20% higher base fee for automatic backups.

Vultr isn’t afraid to back its promise of enterprise-class stability and performance with 100% host node and network uptime guarantees. DigitalOcean provides a 99.99% uptime SLA for both droplets and block storage, and it refunds lost time at the hourly rate incurred.

There’s no need to worry about DDoS attacks with neither of the two VPS hosting providers. Vultr includes 10 Gbps DDoS protection from attacks on all Vultr Dedicated Cloud (VDC) instances in New York (NJ), Chicago, Dallas, Los Angeles, Silicon Valley, Seattle, Miami, Amsterdam, London, Frankfurt, and Paris. In the near future, it plans to offer even higher protection levels as an add-on subscription. All DigitalOcean data centers are protected against DDoS attacks, and DigitalOcean has survived several massive DDoS attacks in the past, so there’s no reason to doubt its ability to survive them again.

Below are screenshots of both the Vultr and the DigitalOcean control panels. Both are very clean and intuitive, and offer a variety of one-click installs.

It doesn’t take a genius to figure out that Vultr and DigitalOcean are aware of each other’s existence. The table above clearly shows that their plans are priced almost identically, with some minor differences here and there that won’t likely matter too much to you.

If you’re running a CPU-intensive web application that doesn’t require too much memory, you might appreciate that DigitalOcean has additional 1 GB and 2 GB plans that include 3 and 2 CPU cores respectively at the expense of memory.

Both Vultr and DigitalOcean include with all plans monitoring and alerts, 24/7/365 customer support, CLI & API access, uptime SLA, worldwide availability, and other essential features. Vultr also allows hourly billing, which is great for running quick experiments without paying much. Since the two VPS hosting services are priced so similarly, the biggest deciding factor for most people reading this Vultr vs DigitalOcean comparison will be their performance.

At the time of writing this article, Vultr has 16 data centers located strategically around the world. In addition to the United States and Europe, Vultr covers also Asia and Australia, which means that latency shouldn’t be an issue regardless of where your visitors are located.

However, if running your web app from a specific location is important to your use case, then you’ll want to review the specific data center locations for Vultr and DigitalOcean below.

What About Customer Support?

Most people have the tendency to underestimate just how important customer service is until they encounter a difficult-to-solve problem and find out that the person on the other side of the chat support window is next to useless.

Fortunately, it’s very unlikely that you would ever have a bad customer support experience with Vultr or DigitalOcean because both companies employ only experienced customer support professionals that are able to help with just about any web-hosting related issue.

Vultr and DigitalOcean offer customer support only through tickets, but they also have plenty of tutorials available, so you should be able to solve most problems by yourself even if server administration is new to you.

Vultr vs Digital Ocean – You Decide

Some comparisons are difficult to write because there are not many differences to pinpoint, and this Vultr vs DigitalOcean comparison was one of them. As it turns out, both Vultr and DigitalOcean are fantastic VPS hosting providers that have a lot to offer to everyone from independent developers to enterprises. While there are some noteworthy differences that you should keep in mind when deciding if you should go with Vultr or DigitalOcean, and we’ve covered them in this article, the fact remains that neither Vultr nor DigitalOcean leaves anything major to be desired. 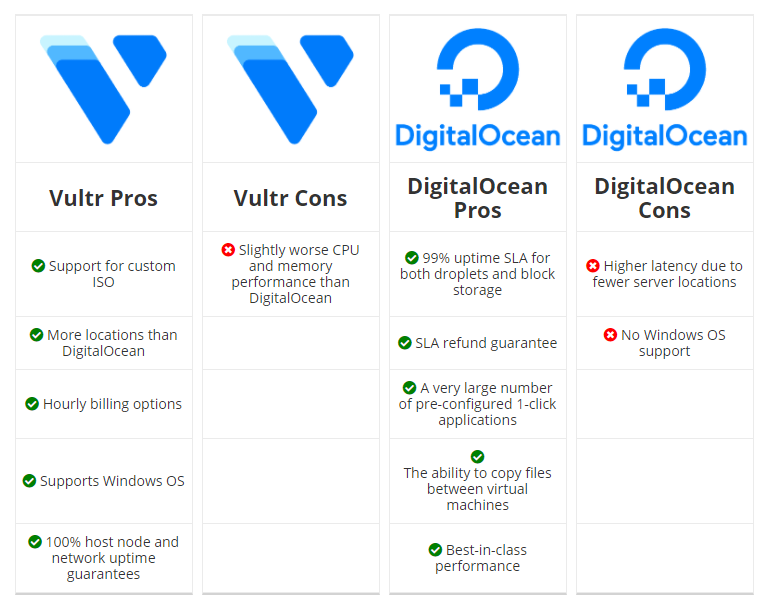