With so many VPN providers to choose from today, it can be difficult to narrow down your search effectively.

Another VPN provider that has entered the market with strong claims about the service they provide is Strong VPN. So, let’s take a look in further detail. 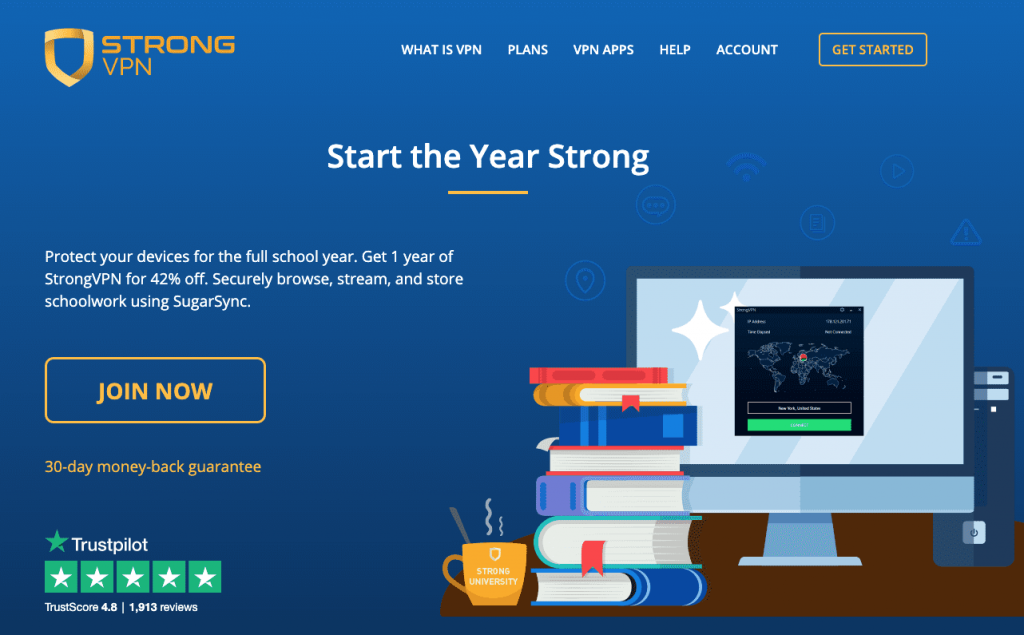 You would be forgiven for assuming that StrongVPN is a new VPN provider, as they don’t have a massive reputation in the industry. However, they have actually been around for quite some time now – since 2005 to be precise!

Strong VPN is based in the United States, and they have more than 680 servers that are spread across 26 different countries. This is a good selection, but if you’re looking for a VPN that is going to give you thousands of servers to select from, ExpressVPN provides more than 3,000.

Some of the countries that are covered with StrongVPN include Mexico, Japan, Germany, India, Australia, Canada, Cyprus, Latvia, Hong Kong, Argentina, Brazil, the UK, the US, Taiwan, South Korea, Singapore, Spain, and Turkey.

There are not any servers in Africa, so do keep this in mind. On the plus side, there are many IP addresses to choose from, with almost 60,000 available, which is ideal in terms of maintaining good speeds.

So, who is behind this VPN company?

StrongVPN was launched by Strong Technology LCC. Over the years, the company has changed hands quite a few times. This most recently happened in 2019 when it was purchased by the public company J2 global.

J2 Global and StrongVPN Technology both operate under the US jurisdiction and this is, unfortunately, one of the least privacy-friendly locations around the world.

Despite this, StrongVPN doesn’t collect any customer activity logs, which is a relief. So, while they have stated that they will comply with legitimate subpoena requests, they have also made it clear that they won’t be able to provide information they do not have.

The first thing that I always do is test the speed of a VPN, and I was definitely impressed with what StrongVPN had to offer in this department.

Whether you’re on a long-distance or same-country connection, you can expect speeds that are fast enough for streaming in HD.

Both download and upload speeds were very fast. One thing that was a little bit disappointing was the level of latency, as this was pretty high.

As I have indicated in all of my reviews, assessing the security features when choosing a VPN is so important.

There are a lot of good things about StrongVPN with regard to security, but there are also a couple of improvements that I would like to see made.

Let’s start with the good stuff! One of the best things about this VPN is that it has a kill switch, which means your information will not be exposed if your connection does drop out for any reason. It happens to the best of us after all.

Aside from this, StrongVPN has its own DNS servers, which means none of your website traffic is going to be routed via third-party servers, and it uses AES-256 encryption as well.

So, what would I like to see changed? Well, a lot of the servers use the PPTP protocol, which is outdated and has proven to be a bit insecure. I much prefer VPNs that use the OpenVPN protocol, which most of the top VPNs do today, such as IPVanish and PrivateVPN.

As I have touched upon, StrongVPN has a strict zero-logs policy, which is always great news when you are looking for a VPN. The company has stated that it will not log or collect any traffic or use of its VPN service. 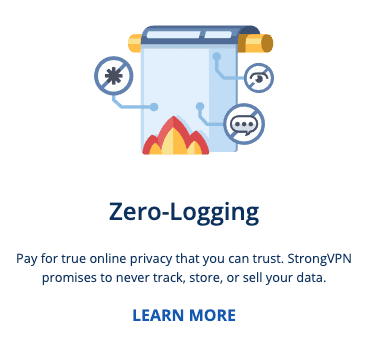 This means you do not need to worry about even basic connection metadata being collected, such as bandwidth consumed, chosen server, or timestamps.

As no consumer data is collected, there is no way that any of your browsing activity online can be traced back to you as an individual.

This is one area that StrongVPN has been working hard to improve as of late. The company recently updated the custom apps that they have available, making them much easier to use, especially amongst those that do not have a lot of technological experience.

The main screen has been stripped back so that only the essential connection details are displayed.

If you choose the cog icon, you will be able to access a limited range of settings. These are very basic, though.

I would not hesitate to recommend StrongVPN for torrenting purposes. There are many qualities that make it a good choice in this department.

First of all, P2P activity and torrenting are both allowed on the servers.

Upload and download speeds are both good as well, which is another tick in the box!

As mentioned earlier, there is a strict no-logs policy in place, which helps to make certain that all of your activity online remains private.

There is also a VPN kill switch, which is another feature I look out for whenever I am trying to find a good VPN for torrenting.

If you are looking for a VPN mainly for streaming purposes, I would recommend checking out some of my other reviews. Surfshark, NordVPN, and ExpressVPN are good options.

StrongVPN is a fair choice, but it is not foolproof. I have experienced inconsistencies in terms of being able to access BBC iPlayer and Netflix. While Netflix works most of the time, there were a few weeks when it was completely blocked. BBC iPlayer, on the other hand, is very hit and miss.

Does StrongVPN bypass the Great Firewall of China?

I guess they call it StrongVPN for a reason, and this is because it has the ability to get past some of the aggressive web blocks that are in place in countries that are highly censored, for example, the UAE, Turkey, Iran, and China.

There are also a number of extra tools that you get to evade online censorship with StrongVPN. These obfuscation tools give you the ability to make your VPN connection even more difficult to detect by further scrambling it.

One thing you do need to keep in mind is that the site itself is blocked in a lot of the countries with high censorship in place, including China, so you are going to need to download it and get it all set-up before you travel there. This can make it a bit difficult for anyone who is already based in one of these countries.

This VPN is compatible with all of the major platforms, and they have developed custom apps for Android smartphones, iPhones, Mac, and PC.

Their website also offers a number of easy-to-follow guides if you want to set up the VPN on different platforms, such as Kodi, Amazon Kindle, and Linux.

You also get a higher number of simultaneous connections when compared with other VPNs. You can connect 12 devices at the same time, making this one of the best I have seen in that respect.

If you are looking for a VPN for gaming purposes, StrongVPN is certainly a good option to consider. You can use it with streaming devices and consoles by either installing it on your home router or following the manual configuration instructions. 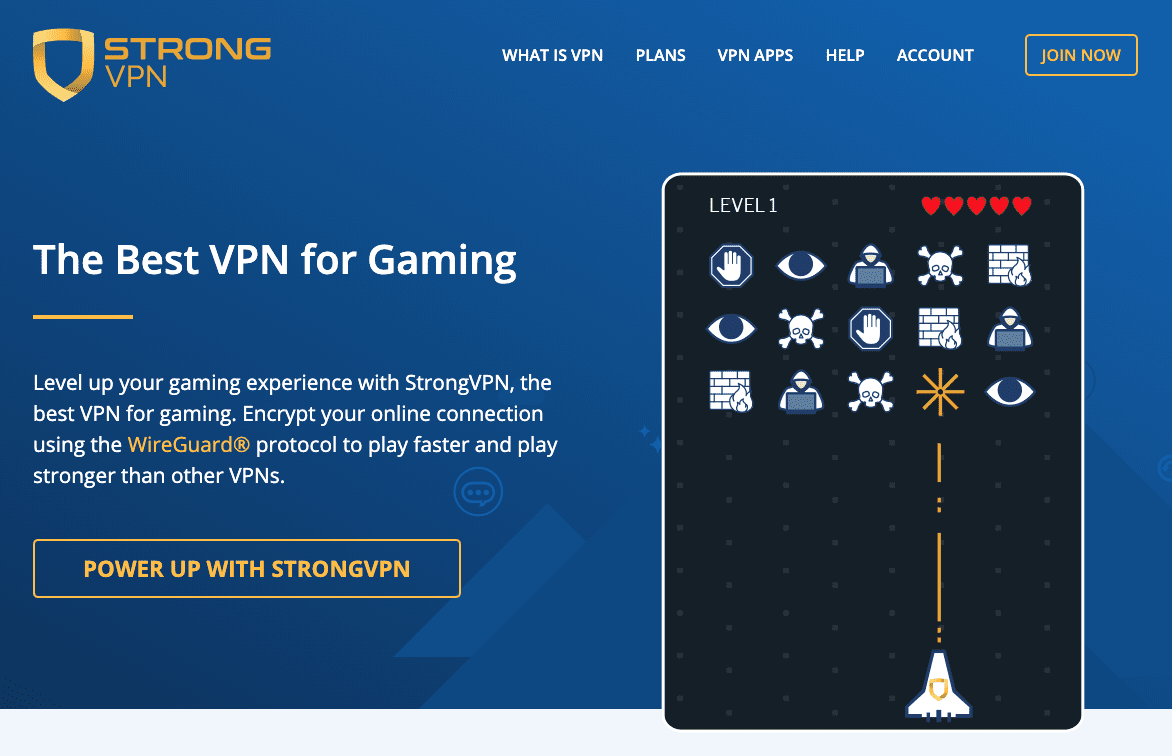 For Amazon Fire TV Stick, there is a native app available. It’s not the best one out there but, hey, at least they have got one, right?

StrongVPN used to provide browser extensions, but it seems that this is something that they have now discontinued and there is no indication as to whether they will be provided again in the future.

The customer support is a bit disappointing. Yes, live chat is available, but it can be a little bit frustrating. You definitely feel like you are speaking with someone who is simply copying and pasting answers from a document that they have in front of them. 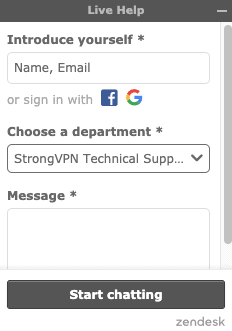 The good news is that you do end up getting the help you need in the end, as queries are then passed onto the tech team, and they will respond to you. Once the tech team got on the case, my questions were answered efficiently. However, it would be much better to simply have the right people on the live chat platform to begin with.

In terms of set-up guides and instruction manuals, StrongVPN have done a great job here. There are lots of different instructional guides for various devices, which contain screenshots and video tutorials to make your life easier. The FAQ section is comprehensive as well.

One thing that StrongVPN has that a lot of VPNs do not is a phone service, so you can call up and speak to an expert if you would rather communicate in that way. I always like to see any company provide this option!

There are currently two price plans available for StrongVPN at the moment. The first is a monthly plan and the second is a yearly plan. 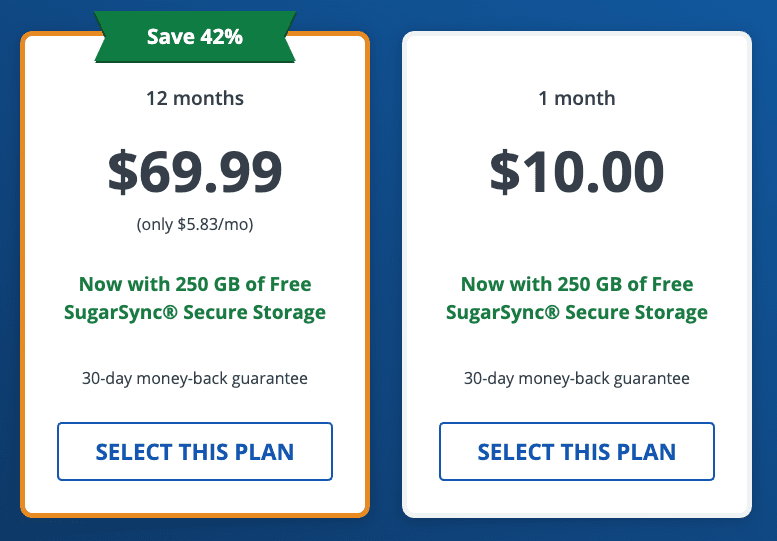 If you are unhappy with the service you receive, there is a 30-day money-back guarantee for your peace of mind.

At present, both of the plans also come with 250 GB of SugarSync® Cloud Storage.

In terms of payment methods, you can use Alipay, PayPal, or any of the major credit or debit cards.

While StrongVPN may not be the perfect app on the market, there is a lot to like about it. The speeds are impressive and it has proven to be a good choice for torrenting thanks to the no-logs policy and the kill switch feature.

If you are not sold on StrongVPN as the VPN of choice for you, there are many other VPNs that I have reviewed, so why not check them out?