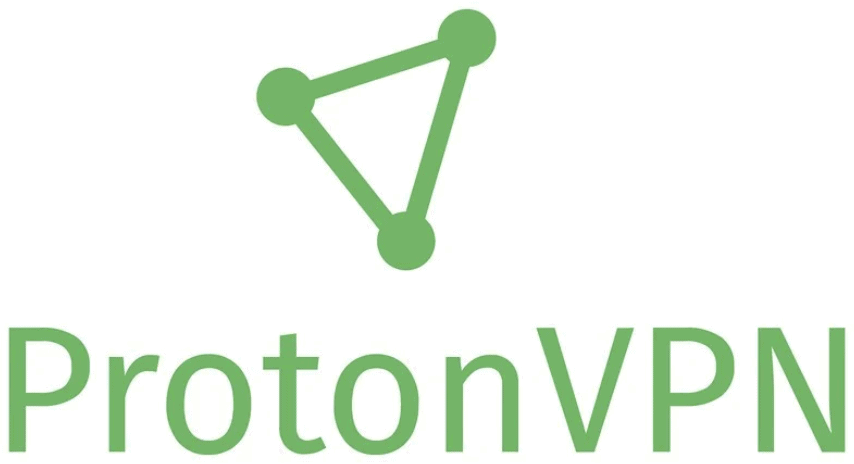 Being based in Switzerland, ProtonVPN immediately got my interest. Switzerland is a great jurisdiction for a VPN, and so I was hopeful that this provider would tick all of the other boxes that I look for in a VPN.

You can read on for my full review on ProtonVPN and all of its features. 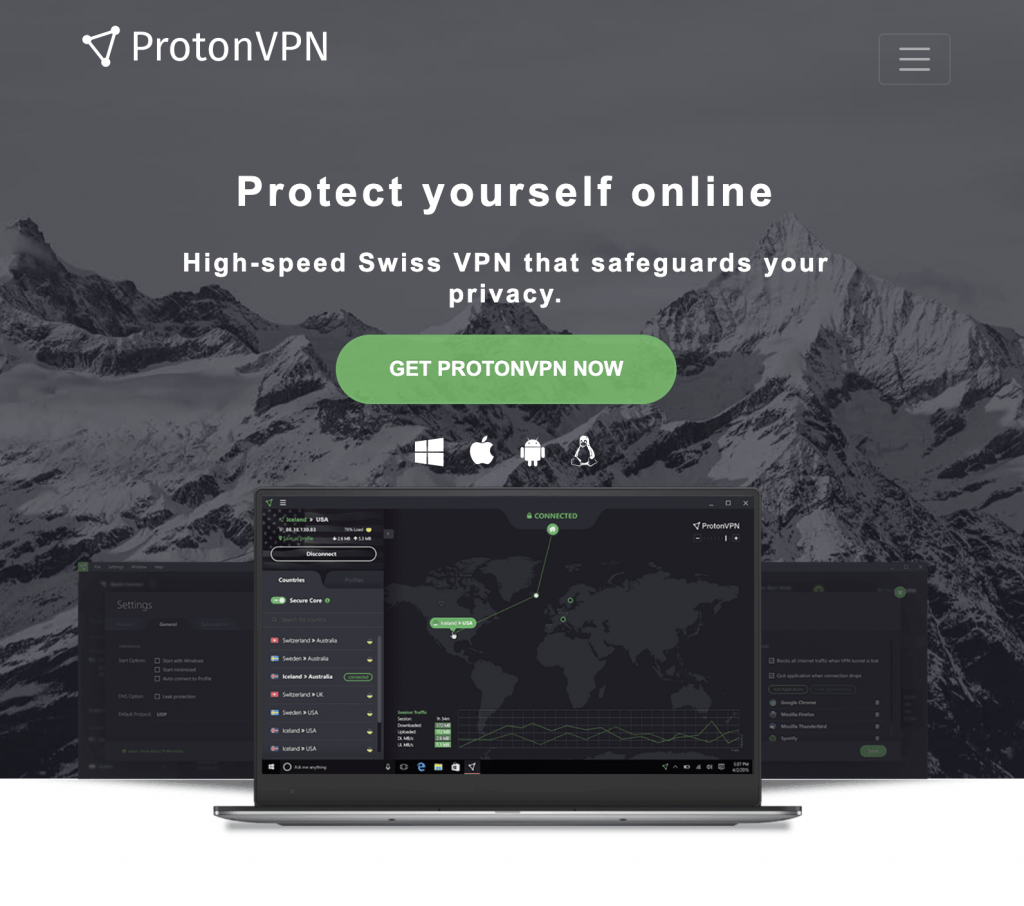 ProtonVPN is run by ProtonVPN AG, and it runs in the territory of Switzerland. This means that its customers will get to benefit from a place of exceptional security, with Switzerland being beyond EU legislations, as well as the 14 Eyes surveillance partnership. This can give you great peace of mind when looking for a VPN, and it was definitely something that I was excited about. 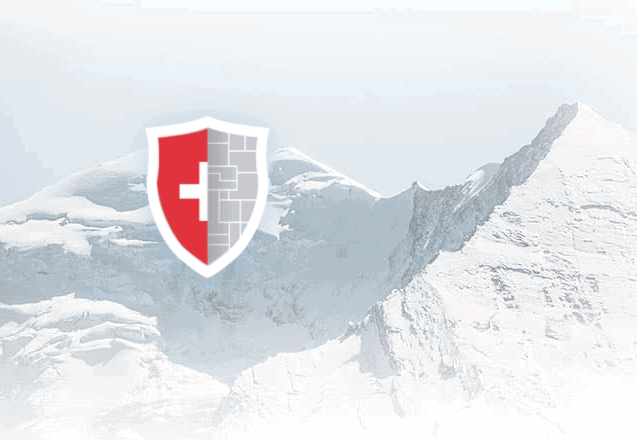 How many servers does ProtonVPN have?

ProtonVPN has a moderate server network. At present, there are more than 1,000 servers, which are based in 54 countries. 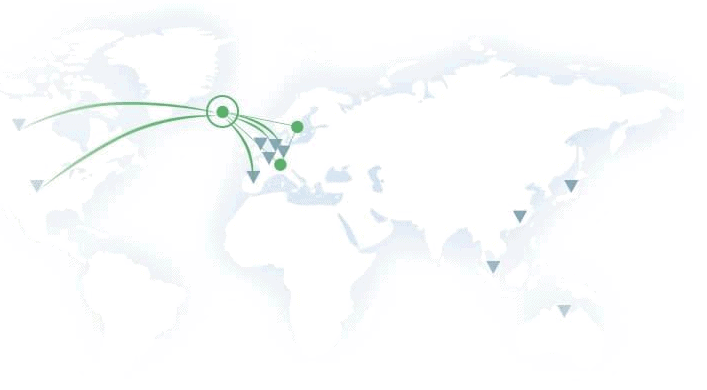 One great thing about ProtonVPN, though, is that all of the servers are physically situated in the country listed, meaning they are physical bare-metal servers.

On the flip side, though, most of the servers are rented from third-party data centres.

A small amount of the servers are owned by ProtonVPN, and they have stated that they have taken extra measures to ensure the third-party servers are fully secure.

ProtonVPN covers North America, South America, and Western Europe. The most popular locations include Canada, the US, and the UK.

In Asia, servers are available in Singapore, South Korea, Japan, India, Israel, and Hong Kong. The only location available in Africa is South Africa.

You will find some city-level VPN servers available as well, with 12 in the USA, three in the UK, three in Canada, and two in Australia.

For greater server coverage, you can’t go wrong with NordVPN or ExpressVPN.

I would say that the speed performance with ProtonVPN is just above average.

In terms of local VPN servers, the results are impressive. I only experienced a percentage drop of between three and four per cent when connecting to local servers.

When connecting to servers over a long-distance, the drop was around 40 per cent. This would still be fast enough for general use, however, there are a lot of better performers for long-distance servers.

The latency is pretty high on the servers, though, and upload speeds aren’t as good as the download speeds, so it’s worth keeping this in mind.

There is no denying that ProtonVPN really stands out when it comes to security. In fact, it was one of the first VPNs on the market to become fully open-source, publishing its source code online. This means anyone can inspect ProtonVPN, guaranteeing that user data is not being mishandled and that the security and encryption techniques in place are watertight.

If that was not enough, ProtonVPN published a security audit carried out by a third-party, showing all of the vulnerabilities either being fixed or accepted. This is the sort of transparency that I wish we could see from other VPN providers on the market.

OpenVPN is used by the ProtonVPN desktop app, and if you read my review you will discover why I think this is the best protocol.

AES-256 is the encryption cypher used, and it is pretty much deemed unbreakable.

I was delighted to see that there are some advanced features available with ProtonVPN. This includes protection against IPv6 and DNS leaks, which have been shown to be effective.

ProtonVPN also has a kill switch, which is a must-have feature for a VPN in my opinion. This means that you can be sure that you will be protected even if the VPN connection drops out for any reason.

Another feature of ProtonVPN is Secure Core VPN, which is a mode that forces your traffic to go through a number of servers prior to leaving the VPN network. 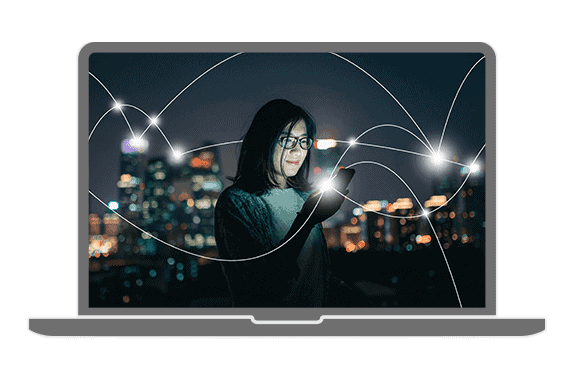 ProtonVPN has a minimal logging policy in place. You will be pleased to learn that it does not log your activities nor does it store any of your information that is personally identifiable.

There is only one thing that is logged by the VPN provider. This is the time and date of your most recent successful login to the VPN. The reason to do this is to ensure that no one is using your account. Every time you use this VPN service, the timestamp will be overwritten, and this data can never be used to trace you in any way.

I certainly think that this is an extremely fair and very positive logging policy.

It is really easy to get up and running with ProtonVPN. The entire process should only take a few minutes. I found the apps to be user-friendly as well, so I don’t think you will have any problem here.

Consistent high download and upload speeds have made ProtonVPN a wise choice for those seeking a VPN for torrenting. However, do keep in mind that this is only possible on four VPN server locations. These are as follows:

You can tell if a server is P2P-friendly because it will feature an icon with two arrows. 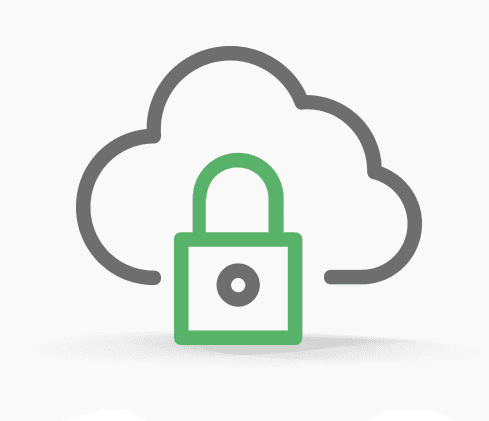 You won’t be apple to use ProtonVPN for torrenting if you opt for a free plan.

While the server spread may be small with ProtonVPN, the fact that there is a kill switch in place can reassure you that this is definitely a secure option.

If you’re looking for a VPN for streaming purposes, I would certainly recommend ProtonVPN. I was able to unblock BBC iPlayer and US Netflix without any issue. 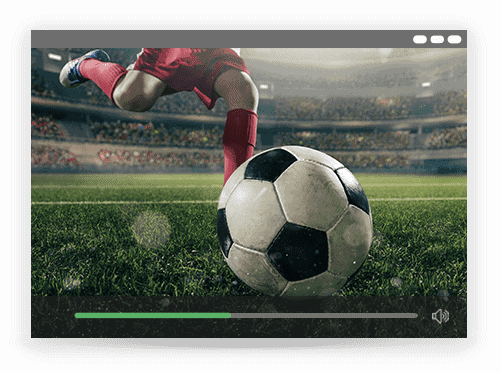 Another plus point in this area is that support for Disney+ has recently been added as well. This means that you can access all of the major streaming services with ProtonVPN.

The best thing about ProtonVPN when it comes to streaming is that you can access streaming services from any of the servers in the required country. This means you don’t have to spend time trying out different city-level servers until you get to one that works.

Does ProtonVPN bypass the Great Firewall of China?

Unfortunately, ProtonVPN is not a reliable VPN for someone looking to connect from China. A lot of people that are based in China have reported struggling with ProtonVPN, and so I simply cannot recommend it as the best option here.

The limited server network is likely to be the problem, and so you will probably struggle in terms of connecting from other high censorship countries as well, like Russia and Turkey.

There are custom apps on ProtonVPN for the following platforms:

If you use Linux, you can install ProtonVPN. However, you will need to download OpenVPN software to do so.

In terms of connecting simultaneous devices, you can connect as many as three on the Basic Plan. This is extended to five on the Plus Plan, and then as many as 10 connections at the same time if you pay for the Visionary Plan.

There are not any native apps for streaming devices or games consoles. This does not mean you cannot use ProtonVPN for this purpose, though.

The easiest way to approach this is by installing the VPN on your home router. Just ensure that the router is compatible by looking on the support pages on ProtonVPN.

Once you are finished, all of the devices that are connected to the Internet in your home will be protected.

There are not any browser extensions available on ProtonVPN at the moment. You can read my reviews on the best VPNs for Mozilla Firefox and Google Chrome for more information on the best options available to you.

One area where I do wish ProtonVPN would improve is customer support. The options available right now are pretty restricted, with only basic queries being covered.

There is no live chat support, which I always find disappointing, as it means you will never be able to get an instant resolution to your issue. 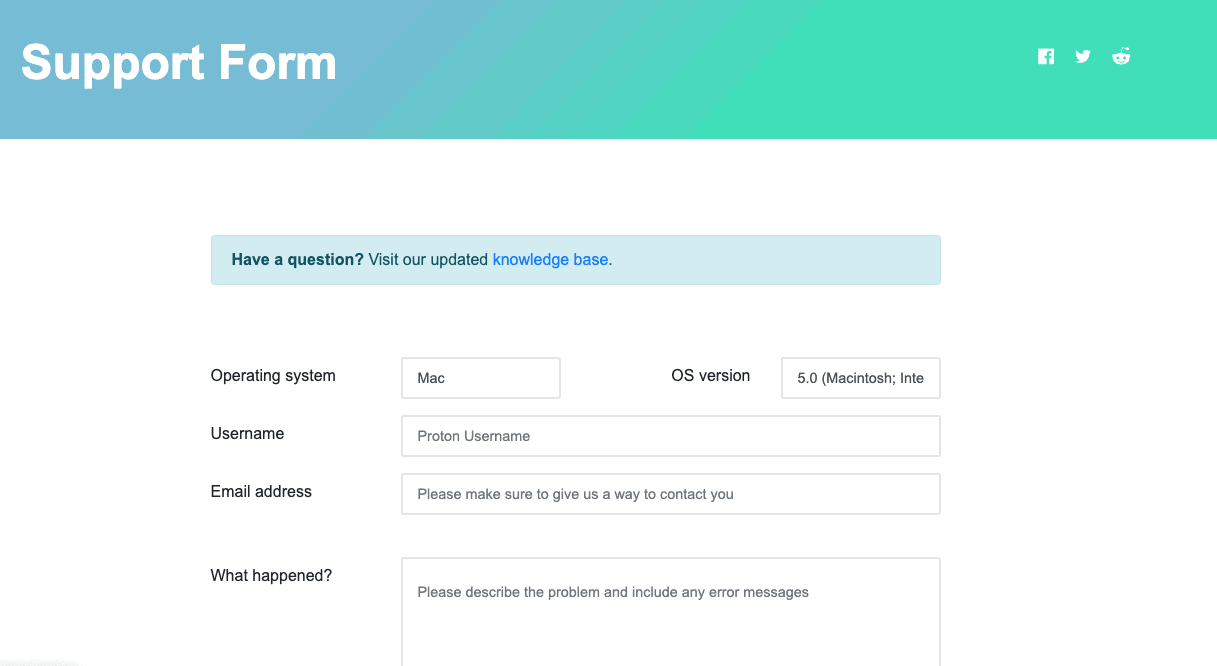 There is an online support center at ProtonVPN, which provides some answers to frequently asked questions on various general topics. You may find the answers you are looking for here.

If you have a device that needs to be manually configured, you should be able to find a relevant set-up guide for this. There is also some basic troubleshooting advice as well.

There are four different plans for you to choose from if you are interested in a VPN from ProtonVPN. This includes one free plan and three paid plans. 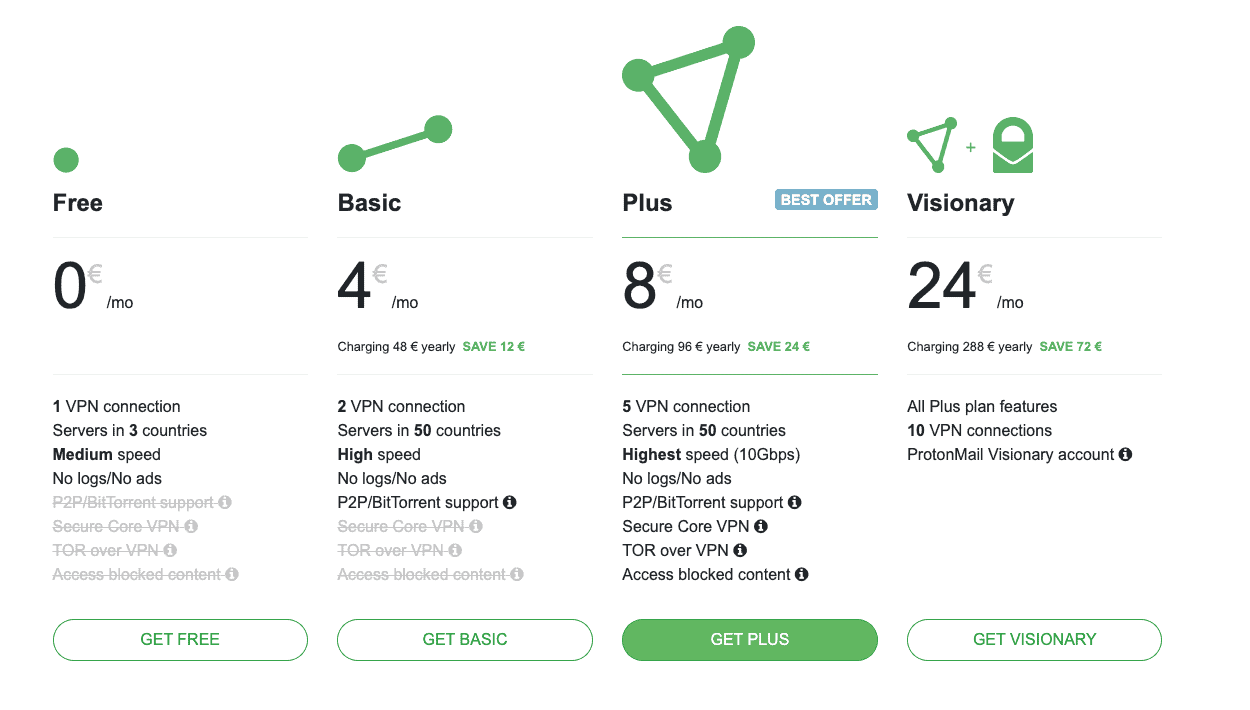 If you opt for the free plan, you will get access to servers in three countries. There is one VPN connection available, as well as no ads or logs. Speed is not as fast with the free plan as it is for the paid version.

If you choose the Basic plan, you will be charged 48 EUR for the year, which works out as 4 EUR per month. With this plan, you get the following:

If you choose the Plus plan, you will be charged 96 EUR for the year, which works out as 8 EUR per month. With this plan, you get the following:

If you choose the Visionary plan, you will be charged 288 EUR for the year, which works out as 24 EUR per month. This includes all of the Plus plan features, yet you will be permitted 10 VPN connections. You will also get a ProtonMail Visionary account, which is an encrypted email service.

All in all, ProtonVPN is a safe VPN service that’s excellent if privacy is your major top priority. It has a marginal logging plan, as well as its applications being fully-audited.

Though it’s not the fastest, ProtonVPN is one of the most reliable services for streaming Netflix and also BBC iPlayer. I advise it as a well-rounded VPN for all customers.