Are you looking for a secure and private VPN that allows you to access streaming services and torrenting anonymously? CyberGhost is affordably priced and packs a punch when it comes to performance.

Romanian and German-based VPN provider, CyberGhost, have over 10 million users. Their VPN offers 3000+ servers across 60+ countries. Users who enjoy torrenting and streaming will be pleased to hear that these activities are fully supported by CyberGhost.

CyberGhost not only support desktop, they also provide dedicated apps for Windows, Mac, Linux, Android, and iOS. This VPN will ensure that you can browse the internet safely and securely, blocking malicious websites and trackers. It’s automatic HTTPS redirection tool will reassure it’s users that they can continue to browse securely across all websites.

CyberGhost’s pricing is very simple and easy to comprehend. The longer you sign up for, the cheaper their plans become. If you’re not keen on signing up for the long-term, prices start at £11.99 on a monthly basis and include the following features:

Although their prices may seem a little steep compared to other providers, their features are certainly worth paying the extra for. I’ll go into more detail regarding their features a little later on. Personally, I’m really excited by what’s on offer, especially considering you can run their VPN on 7 simultaneous devices at once.

NoSpy Servers: CyberGhost have a dedicated NoSpy data center which ensures users are safe from third-party spying and surveillance. All of their servers boast 256-AES encryption and are located in Romania, which further ensures it’s users’ privacy. Because of this jurisdiction, data gathering is not enforced, so CyberGhost offer a zero logs policy. User’s can browse and stream without the worry that their traffic is being logged.

Secure Downloads: CyberGhost support users who want to torrent (P2P); they provide unlimited data and bandwidth so you won’t have to watch your transfers. Anonymity and privacy are at the top of CyberGhost’s agenda, offering specific servers for torrenting activity. If there’s any interruption in the encrypted connection, the VPN’s kill switch will take action, making sure your privacy is never compromised.

YouTube access: It may come as a surprise, but some websites like YouTube are blocked in certain countries. For users in Turkey, China, North Korea, and other locations, YouTube is not accessible. Luckily for CyberGhost VPN users, you can securely access YouTube (even when you’re at school or in the office). If you’re travelling abroad, you can take your device with you with the CyberGhost app, allowing your to bypass filters and continue to enjoy your experience. 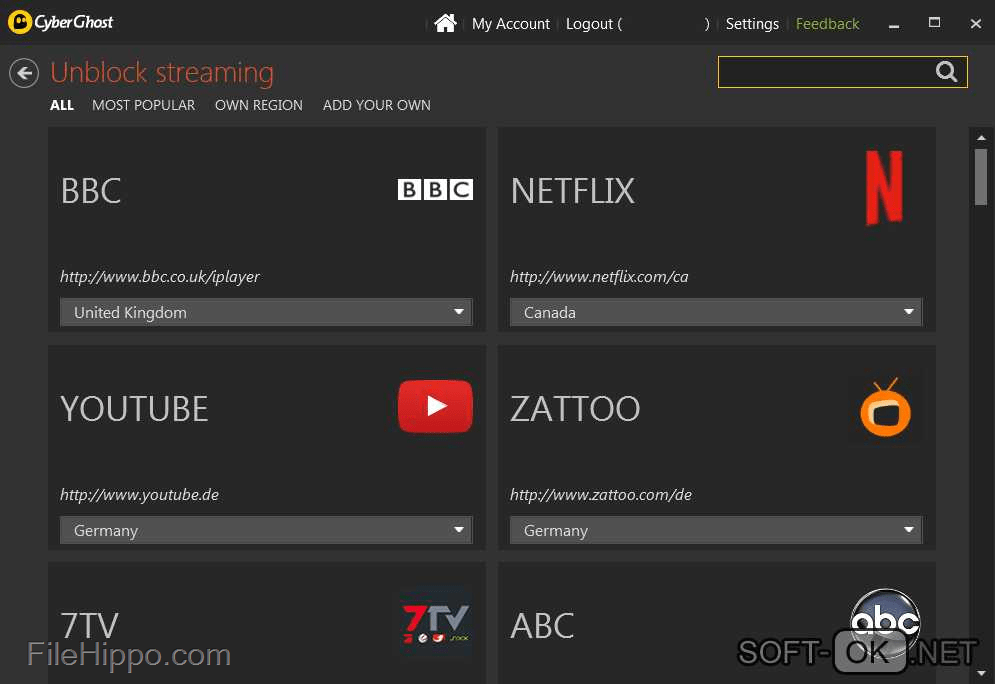 When connecting to a VPN, privacy and security is of course the most important factor. However, speed and performance is essential too; without these, your VPN could prove to be pretty useless. When connecting to U.K. servers via our connection test, we were pleased to enjoy speeds of around 60Mbps on a 75-80Mbps fiber line.

Similarly across European servers, speeds maintained around 60Mbps and only dropped slightly in Eastern European locations. Connecting to U.S. servers was my main concern, but CyberGhost proved my concerns wrong, coming in at a very steady 55Mbps. Considering what they offer, this was a really eye opening test!

Many people choose to a use a VPN so that they can access popular streaming services in other locations, like Netflix. Sometimes this can be a challenging and fiddly task, but thankfully CyberGhost make this process very easy.

When connecting to CyberGhost, simply select the country you want to connect to from the Netflix list provided. The intelligent app will choose the best server and you’re ready to go. That’s literally as simple as it is, and it actually works (I’ve tested it).

Other streaming services are also available, like Amazon Prime, Hulu, BBC iPlayer, YouTube, etc. Testing the U.S. versions of these services from the U.K. was again very simple, and CyberGhost proved that VPN’s really can bypass these blocked locations.

Some VPN’s support torrenting but aren’t particularly upfront about it. CyberGhost’s app comes with a ‘torrent anonymously’ option so you can get started straight away. It will choose the best server for you, or you can override this if you have one in mind.

Built-in tracking blockers and malicious URL filters are enabled by default. These tools can really help users who want to torrent, ensuring they avoid detection and keep their torrenting activity completely private.

Although CyberGhost’s mobile apps are easy to use, they do lack some of the features the desktop app boasts. There’s also a lack of consistency through the various mobile apps, e.g. between Android and iOS. The iOS app allows you to connect/disconnect, defaulting to the nearest server. You can browse through different locations but the settings are fairly limited.

The Android version of the app is quite different to the iOS app. There’s no option to favourite servers, and there is a lack of web filtering options which the iOS app has. Compared to iOS, Android seems to be the inferior version, and I’d like to see a little more unity in this area.

Would I recommend CyberGhost?

The bottom line is YES!

CyberGhost is an incredibly powerful VPN with lots of interesting features. What’s more, it’s really easy to use, even if you’ve never used a VPN before. Whether you want to access your VPN via desktop or mobile, the options are there with CyberGhost.

If speed, performance, streaming, torrenting, and privacy are important features for you, CyberGhost won’t let you down. Best of all, their features actually work – many VPN providers claim you can bypass location blocks but the process is fiddly.

CyberGhost make it easy to choose the best server for your usage, maintaining consistent speeds across the globe.