AirVPN started its journey back in 2010, with only two dedicated servers in one country. Since then, they have gone from strength-to-strength, with over 200 servers available today. 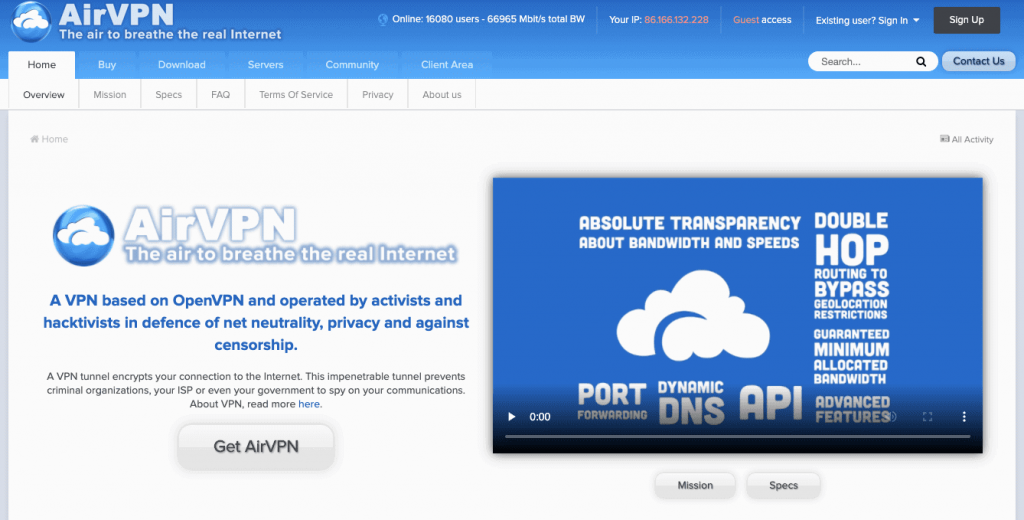 With so many VPN providers to choose from, it is difficult to narrow down your search. I always advise people to think about what is most important for them in terms of the VPN service, and then this can help you to head in the right direction! So, if security is your main priority, I’d definitely advise that you consider AirVPN.

AirVPN runs exclusively on OpenVPN and uses top encryption cipher AES-256. The app delivers fast download speeds and high security, yet there are a few drawbacks you need to be aware of as well. For example, I’d say that this is more for advanced users than beginners. Plus, if you’re looking for an easy solution for BBC iPlayer streaming, I would point you in the direction of the likes of ExpressVPN instead.

There is nothing more frustrating than a slow VPN, is there? You won’t be able to torrent, stream, or play games!

It is always natural to lose a little bit of speed, especially with overseas servers, as your data is going to be travelling further. However, this should be barely noticeable with a premier VPN, and I am pleased to say that this is the case with AirVPN.

Although their server base has grown significantly over the years, they do have a much smaller server network than a lot of the competition, with 200 individual servers. For instance, they don’t have a server in Australia at the moment. Despite this, though, the speeds are impressive and more than sufficient for streaming, torrenting, and more.

I experimented with plenty of different server locations, and I found that the speeds were quick over long distances too.

It is clear to see that AirVPN are targeting the US market. They currently have 37 servers across ten cities in the US at the moment. This includes five in Phoenix, one in Pennsylvania, three in New York City, three in Miami, three in Los Angeles, one in Jacksonville, three in Fremont, 10 in Dallas, three in Chicago, and five in Atlanta.

Europe has a great spread, with 153 servers spread across 15 different countries. However, South America and Asia are rather limited, while Africa is non-existent. In South America, you will only find VPN servers in Brazil, whereas Asia is restricted to Singapore, Japan, and Hong Kong. 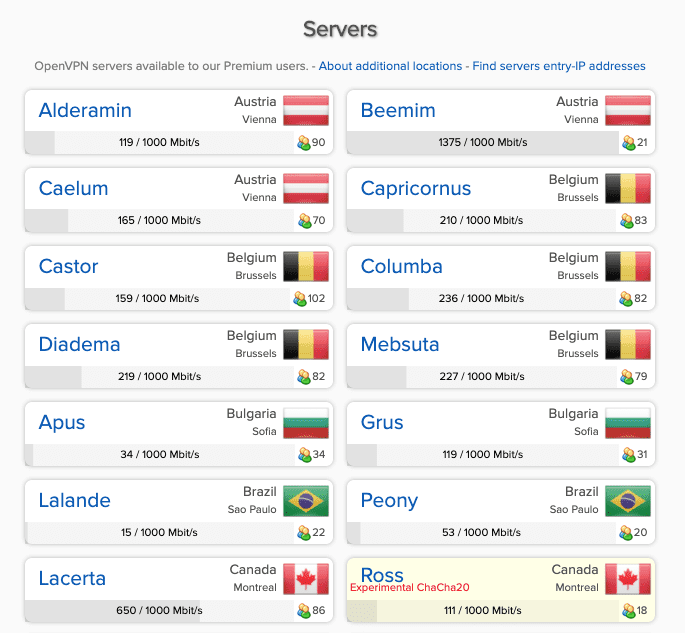 As I mentioned in the introduction, one of the best things about AirVPN is the level of security, and so it is only right that I tell you a bit more about this next.

AirVPN is one of the most secure VPN services out there in my opinion! The software runs exclusively on OpenVPN, which provides great performance/security balance, and the encryption is via top cipher AES-256.

AirVPN has a no-logging policy, meaning no records of your browsing data or activity are kept.

There are a number of other great features as well, including split tunneling, WebRTC leak blocking, IPV6 leak blocking, first-party DNS, and DNS leaking blocking.

AirVPN operates its own DNS servers, which helps to keep your personal information confidential. There is also a VPN kill switch, which is an essential feature I know a lot of you will be looking for, as it protects you should your connection drop out.

I also noticed that you can use AirVPN for accessing the Tor browser, which is ideal for offering another encryption layer if you need it.

Finally, another security feature that I am a big fan of is the “doublehop” – this regularly switches your IP address to stop your location being tracked.

Does AirVPN work in China?

Yes, but as anyone with a bit of experience knows, the Great Wall of China is not easy to bypass! You will need some technical skills if you’re going to use AirVPN in China. I did notice that there are a few guides on the AirVPN website, which should help you!

I found the AirVPN app very easy to use and quick to install. It is a bit outdated appearance-wise, with a few features lacking, for example, there aren’t any automatic connections or optimized servers.

Because of this, you can find yourself having to sift through different servers and find the best one, which is a bit annoying, to say the least!

Advanced users will be happy, though, as was I when I saw that you could customise virtually every part of your VPN within the app.

Once you are logged in, you can select your server manually, or you can choose the fastest and closest server. You need to head to the Countries panel to whitelist the country you want to connect to. After this, switching to the servers panel and start filtering through the list to pick the one you need. As mentioned, this can be a tedious process, and you may need to try a few servers out before you get to the right one for you.

Not only do the quick speeds make AirVPN a great choice for torrenting, but it offers a suite of advanced privacy tools, including a kill switch, a minimal logging policy, and impressive upload speeds too.

If you consider yourself an advanced torrenter, you will be happy to hear that port forwarding is enabled on up to 20 ports simultaneously so that transfers can be quickened up even more. This is something you can do on the AirVPN website via the Client Area.

One of the main reasons people look for a VPN is because they want to unblock Netflix in other countries. You will be pleased to know that you can stream Netflix using AirVPN. I did notice a small speed reduction, though, so I would recommend letting the stream to load for a little bit before you hit the play button.

I also found AirVPN to be effective in terms of streaming HBO GO and Hulu. However, there were a few issues when trying to watching BBC iPlayer, even when choosing a UK server. If you want a good VPN for streaming purposes, check out my review on NordVPN.

NordVPN has an ad-blocker as well, which is something AirVPN is lacking. If you want to use streaming services that are ad-supported, you’re going to have those annoying mid-roll ads and pop-ups.

One thing I do have to give AirVPN credit for, though, is the fact that they are very upfront about the sites that are blocked. They have a list on their website, so you can check which sites their servers cannot access at the moment.

AirVPN is compatible with a wide range of devices. This includes all of the following:

You can connect as many as five devices to one account.

It can also be used with a number of other streaming devices and games consoles, either by sharing the VPN connection from another device that is running the software or by connecting them to a router that has been configured.

There are no troubleshooting or manual set-up guides for any of these devices, yet you can use the online forums to find a lot of useful tips and hints.

AirVPN does not offer any browser extensions for Mozilla Firefox or Google Chrome, which is not really surprising when you consider that AirVPN does not have many native apps for different devices.

If you want a VPN that has full-featured VPN extensions for all of the well-known browsers, I would advise going for something like ExpressVPN. You can also read my reviews on the best VPNs for Google Chrome or the best VPN for Mozilla Firefox if you’re looking for something for a specific browser.

AirVPN’s customer support is delivered via an online ticketing system. This means that you could find yourself waiting a day or two for an answer, as I did. I would certainly appreciate a live chat function being added to their website.

As I touched upon, I do think AirVPN is better suited to advanced users, and this is shown by their customer support. The answers could be quite complex for a beginner.

One thing I am a big fan of, though, is the extensive knowledge base on the AirVPN website. There are lots of questions answered and tutorials here, which are split up logically based on the topic.

As AirVPN is based in Italy, their prices are displayed in euros but they use the European Central Bank to provide real-time exchange rates for those overseas.

There are seven different plans to choose from, which vary based on the period of subscription. The longer you sign up for, the bigger the discount. For instance, if you sign-up to a three-year plan, you can save as much as 60 per cent in total.

To make things simple, all of the plans include the same features. It is merely a case of there being different contract lengths to choose from. 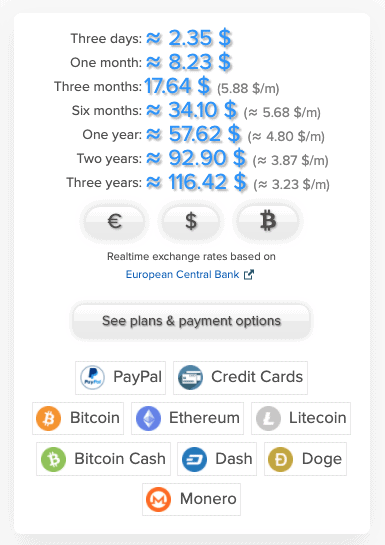 One of the great things about AirVPN is that you can pay in basically any manner that is suitable for you. This includes a wide range of payment processors, from PayPal to credit cards. You can also pay in cryptocurrency if you would prefer.

Is there a free version of AirVPN?

Unfortunately, there is not a free version, nor is there a free trial for any of the AirVPN services, which is a bit frustrating.

I would recommend opting for the low-cost three-day subscription service if you would like to try this VPN out before you buy.

You can apply for a refund if you are not satisfied with the service provided. You need to do this within three days of payment. AirVPN will then refund you within 30 days of this request. However, to be eligible for the refund, you cannot have used five GB of data or more and/or you must not have violated the terms and conditions.

AirVPN is a great choice for anyone looking for a VPN with high-level security features, as well as being an effective choice for torrenting. If you are in need of a VPN for streaming, I would recommend looking at some of the other VPNs that I have reviewed.